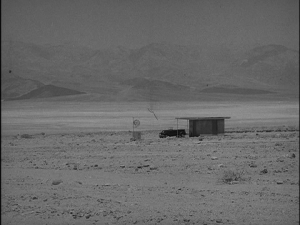 This particular episode contains some strong concepts: outer-space imprisonment, loneliness, and the capabilities of a robot to serve as a cohort.

Solitary confinement takes place on an asteroid, a version of criminal punishment in the future, imprisonment being outdated. Sterling utilizes the desert as an allegory for space and infinity, a theme he will continue to explore in future episodes. The man held captive is delivered a crate during one of the routine supply deliveries that take place every three months. It’s a gift from a compassionate deliveryman to help the man through his fifty-year sentence for murder. When asked what the contents of the crate are by one of the other members of the crew, he states, “I’m not quite sure, really. Maybe just an illusion, maybe its salvation. I don’t know.”

It’s a machine, though “physiologically and psychologically she is a human being with a set of emotions and a memory track.” Violently opposed at first to a machine aiding him through his time, the man becomes enamored with “Alicia” in discovering that she, though a robot, has feelings too. In questioning his situation after eleven months, the man wonders whether what is occurring is a relationship between man and woman or man and machine. The one certainty is  that she not only caters too but also develop his tastes. His loneliness is eliminated by the presence of “Alicia”.

With much time passed, the delivery crew returns with fated news—the man has received a pardon and is being shipped back to earth, though he is only able to carry fifteen pounds of baggage. The problem of most significance in this episode is presented in the separation of the man from “Alicia”. “She’s not a robot,” the man pleads, “She’s a woman. You don’t understand. If you leave her behind that’s murder.” Fully-succumbed to the emotional companionship of his cyborg companion, the man refused to give up his love.

Until the man who originally brought the robot, effecting desperate measures, shoots Alicia in the face.

Similar to a Stepford Wives scenario, a robotic imitation serves the role of a female in the image of the man who makes her possible. Of interest in this case is the man’s dismissal of reality, his lack of acknowledgment in regards to the robotic nature of his love. However, when reminded of her internal components (electronics, exposed through her blow-open face) he is able to abandon his feelings and return home.

A commentary on loneliness as much as the possibilities of a cybernetically guided future, “The Lonely” posses questions even today of our attachment to and enchantment by technologically-aided devices. Perhaps the commentary also inadvertently alludes to the effect of technology to create an impressive illusion of reality, a perfect Twilight Zone scenario.