Thanks to my friend Perry Hohlstein for the link. 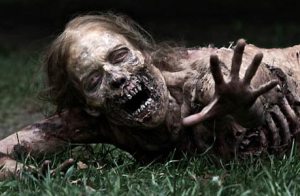 [Image: One of the zombies introduced in the The Walking Dead’s first episode, Days Gone By.]

AMC has a new miniseries, The Walking Dead, based on a graphic novel of the same name. The show takes place in the ruins of a zombie apocalypse. Just as in 28 Days Later,  The Walking Dead begins by depicting  the main character going through a trial of surreal moments, waking up in a hospital bed  and navigating through a ravaged world.

Why a riot of zombies can cover the face of the earth, including inside the actual hospital building, and somehow overlook a person passed out in bed is beyond me. Regardless, an unconscious patient seems to be a relatively successful way to introduce a protagonist to the viewer as well as the newly cleared out/decimated world. In this case Rick Grimes, an injured small-town sheriff, discovers the horror of piles of dead bodies and mangled carrion shells of the once living.

Kind of like a nightmare, kind of like a smattering of every other zombie flick out there, the world portrayed post-zombie apocalypse in this miniseries is one in which emptiness is eerie and the urban areas are the most dangerous, though in this case alluring due to the misconception that they may provide a form of hope or salvation (spoiler alert: but really a bunch of zombies will just eat your horse instead). 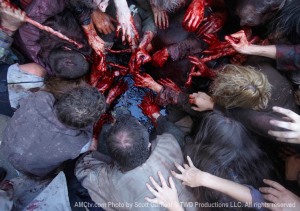 [Image: Zombies eating the innards of a horse.. Scott Garfield.]

I would be curious to see, not just in this particular zombie escapade but in most contemporary zombie media,  how survivors actually survive beyond just fighting zombies. How are basic needs met after the collapse of industry and in what ways, if any, does an intelligible infrastructure present itself over time?

I like watching dead people get hit in the head with baseball bats as much as anyone else, but I wonder about ten, twenty, one hundred years past a zombie invasion, assuming that survivors last long enough to procreate and a sort of normalcy can set in in the same way a country reverts back to it’s everyday proceedings after a nuclear attack or natural disaster, adopting new ways of living and adapting to the changed world.

And how long can zombies survive for anyway? I guess you can rudimentarily freeze them in some snow-capped mountain like the zombie nazis in Dead Snow. But besides for that, one would think that over a certain period of time, the carcasses of zombies would have to undergo a process of organic decay, eventually just rotting away into nothingness. After all the zombies were gone, how would the world rebuild itself? What decisions would it make differently, ensuring it’s safety, comfort, and chance of any further outbreaks?

You can watch the first episode of The Walking Dead here.