Solowheel presents a version of the shitty future now.

Alright, mobile urbanites. Here’s a great example of how you take a bad idea and make it worse.

Watch out for those cliffs…

(Thank to Joey O’Mahoney for the tip via coolhunting. Check out his blog for all things New Orleans D.I.Y. skateboarding.)

Supercomputer defeats the champions of Jeopardy.

Get used to it.

[Image: Film still from Leni Rifenstahl’s Triumph of The Will]

Archived footage has been discovered from 1936, showcasing the talents of Nazi propaganda filmmaker Leni Riefenstahl.

According to Wikipedia, Riefenstahl was referred to as “the greatest female filmmaker of the 20th century” after completing Triumph of The Will, her most well-known propaganda film:

In his book The Story of Film, film scholar Mark Cousins claims, “Next to Orson Welles and Alfred Hitchcock, Leni Riefenstahl was the most technically talented Western film maker of her era”.

Read the full article on this recent historic acquisition here.

Tagged 3d, Nazis, Olympia, space, the end of the world, Triumph of The Will, war

[Image: From the bizarre Kim Johg-il looking at things collection]

February 16th, 2011 marks the 69th birthday of Kim Jong-il. As leader of the Democratic People’s Republic of Korea, Kim’s birthday is a major national holiday accompanied by mass celebration. That means figure skating, synchronized swimming, and general disregard for the serious social instability  threatening the nation as a result of a food shortage.

Worth mentioning while on the subject of North Korea and its domineering tendencies and infrastructural failures is the Ryugyong Hotel in the capital city Pyongyang. 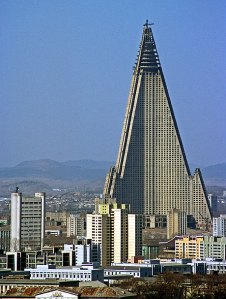 Set to be the largest hotel in the world, construction began on the Ryugyong in 1987 and ceased five years later due to lack of resources. The building has yet to  be completed. A rusting construction crane sat atop the one-hundred-and-five story structure for several years,  seemingly removed sometime after the project resumed in 2008 under an Egyptian business group largely invested in telecommunications.

A Flikr series showcases some of the new work done to the facade of the building.

A covering of mirrored glass adorns the exterior of the Ryugyong. It’s still unclear as to whether or not any construction beyond the cosmetic has been completed in this purportedly irreparable, structurally unsound building.

Well the country of North Korea appears as a blank, gray shape in Google Maps, a satellite view allows an interesting view of this architectural weirdness:

But enough about menacing dictators and massive, decaying hotels–what about the “human jumbotron”?

I watched this video recently. Several times since, I’ve paused throughout my day to personally acknowledge that its totally amazing.

I thought it worth sharing. Found via BoingBoing.

Tagged survival, the Amazon, the rainforest, the world, uncontacted tribe

I found this short documentary via Good Problem.

Undercity is an exciting glimpse into what is probably the most important part of Steve Duncan’s world–a version of urban exploration that is as much a traveling, tactile history lesson as it is a dangerous and mutated version of  spelunking. One of the many intriguing aspects of the project is its direct response to the lived environment: Rather than arriving in Vietnam to journey throughout it’s vast cave system or venturing to Tanzania to conquer Mt. Kilimanjaro, Duncan explores a territory specifically man-made and readily available–yet, infrequently chartered.

In a sense, Duncan’s explorations take place in areas designed to be accessible. “Manholes” are called just that, as they are made and placed to accommodate the admittance of a person, essentially apertures in the grid of public works. Albeit, Ducan excursions bring him to extremely “off-limits”, restricted territories in the city, constructions which serve as integral forms of infrastructure; illegal to trespass, wholly uninviting and, most importantly, undetected and concealed.

…Nobody really seems to understand why I want to see these amazing structures…It kind of makes me sad that there’s so much suspicion around just appreciating the city.

I wonder what, if anything, the exposure of these expeditions will do to alter the myriad factors involved in urban planning and exploration. A New York Times’ article entitled “The Wilderness Beneath Your Feet”, at one point, questions whether or not Duncan’s travels have turned into a “media event”. In a New York full of post-9-11 fears, I wonder how the Department of Environmental Protection might feel about the research of Steve Duncan; or, better yet, how might the Department of Homeland Security respond to learning of it’s vulnerabilities in the nation’s most populated city?

In the opposite direction, is there a potential for the growth of this specific brand of city engagement? Imagine a new form of recreation, it’s  axis being the study of urban anatomy via tunnels traversed by foot. Checkpoints and hostels existing in the underground, along routes mapped out for their historic significance and architectural qualities.

As a note, I couldn’t mention the underground tunnels of New York without thinking of Dark Days, a documentary worth watching about people that lived underground in abandoned parts of the city’s railway system.